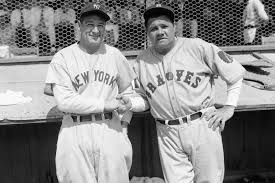 I’m more a fan of baseball personalities than I am of baseball.  And in this pandemic-delayed season, I’ve had plenty of time to indulge my favorite pastime, mapping personality styles.

A short while ago on this blog site, I displayed the actual Personality Self-Portrait of the late catcher and morning TV co-host Joe Garagiola, which I interpreted live on camera with him on The Today Show years ago.

Today I take on Babe Ruth and Lou Gehrig.  They were friends, teammates and the best hitters in baseball.

A most unlikely friendship

I came across a piece in The New Yorker magazine about these two baseball legends recently.  Louis Menand wrote a fascinating narrative about their big, contrasting personalities and their great friendship, titled “How Baseball Players Became Celebrities.”

As Menand put it, “they were polar opposites.  Ruth was all flamboyance and swagger.  He bought expensive cars and wrecked them.  He wore raccoon coats and smoked big cigars.  He gambled and caroused…. He was famous to the public for his appetite for food and drink; he was famous to his teammates for his appetite for sex.  He made no secret of it….  The key to Babe Ruth, though, was this:  everybody loved him.”

But what of Lou Gehrig?  Ruth and Gehrig “were the best hitters on the best team in baseball, the New York Yankees…. Gehrig idolized Ruth as a ballplayer, and Ruth was easy to get along with.  They travelled together, played bridge together, and barnstormed together….  Everybody respected Lou Gehrig.  They did not love him.  He was good-natured but distant….  Until 1933, when he turned thirty, he lived with his parents.  He brought his mother to spring training.  When the team was on the road, he would leave the hotel after dark and walk the streets himself so his teammates would think he had plans.”  He was quoted as saying that he had “one true friend, my mother.”

“The Iron Horse,” as he was known for his stamina, became ill in 1938.  After an extraordinary baseball career, he withdrew from the game.  He died in 1941 of amyotrophic lateral sclerosis, known ever since as Lou Gehrig’s Disease.

Needless to say, I never met either legendary player.  But what if I could talk them into taking The New Personality Self-Portrait?  Here’s how I think they would have come out.

For Gehrig, in contrast:

No single formula for superstardom

So birds of a feather don’t always flock together, do they?  Not only did this unlikely pair of phenomenal athletes form a lasting friendship, they both became superstars.  And celebrities.

And it’s more than just a story of opposites attract.  This is one illustration of many other examples to make a most important point: There’s no single personality formula for success—it comes in all stripes and colors.