It’s now the spring baseball season, but we’re in an upside-down world in which it’s hard to imagine sitting in a crowded stadium.  Anyway, so far we don’t have a choice, since the season is postponed and the stadiums are closed.  But in the spirit of the season, I thought it might be interesting to tell a story about one of the nicest guys in baseball—a guy named…

Joe was a popular catcher who played nine seasons in Major League Baseball for the St Louis Cardinals, the Pittsburgh Pirates, the Chicago Cubs and the New York Giants.  He grew up in St. Louis across the street from another catcher, Yogi Berra.  Joe became one of the first players to make it big in broadcasting as a play-by-play announcer and then color commentator after retiring from the game.  He later did two stints as co-host of  NBC’s The Today Show, and he was a popular host on TV game shows from another era, 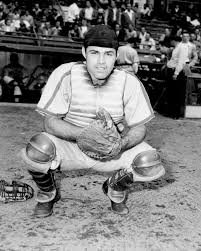 including To Tell the Truth, He Said She Said, Sale of the Century, Memory Game, and Strike It Rich. He even subbed for Johnny Carson on The Tonight Show from time to time. He was affable, emotional, kind, and funny.  Shown here are photos of Joe the ball player and Joe the television personality.

Those are a few facts about Joe, but why am I talking about him?

Here’s the story:  In 1990, The Personality Self-Portrait, a book I co-authored with Lois B. Morris, came out in hardcover from Bantam. In the roll-out of the new book, I was invited to appear on The Today Show.  The co-hosts of the show at the time were Bryant Gumbel, Deborah Norville, and Joe Garagiola.  I gave each of them a copy of the book in advance, and then I showed up for a live interview with Gumbel and Garagiola.  Joe had agreed to take The Personality Self-Portrait Test, and we hand-scored it in his copy of the book.  Then Bryant and Joe put the  graph on the screen, and the three of us discussed it on the show.  Here’ Joe (click to enlarge): 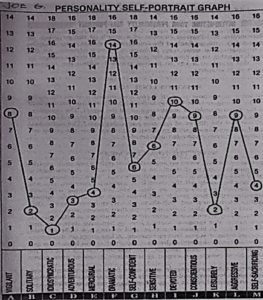 If you look up Joe in Wikipedia, it says he was “popular for his colorful personality.”  And, indeed, it was all there in his chart—and in the fun we had discussing it on the air.  His highest score, Dramatic, was no surprise—he loved to be under the lights, in front of the mic calling the plays, and  on the screen.  Three of the other high scores  made sense:  you have to be Vigilant to keep your balance in the world of Major League Baseball, just as you have to be Aggressive, and you’ve got to be Conscientious and responsible to be as successful as he was.  (By the way, Gumbel was particularly taken by Joe’s high score on Aggressive, which he said he could personally vouch for!)

But the remaining high score, Devoted, was one that at first surprised me.  Someone with such a high score on that personality style usually prefers to take a back seat and stay out of the limelight.  But then again, take a look at Joe’s devotion to family and the game (he married the St. Louis stadium organist, and two of his three children went on to careers in baseball management).  He spoke loudly of teamwork, a prominent Devoted strength, and he was active in the Baseball Assistance Team, a charity for former players who had fallen on hard times.

It was only later that I learned that Joe’s ball team nickname was “Mr. Loyalty,” so there you have it!

Joe Garagiola died in 2016 at the age of 90.  He was quite a personality, and he lived a rich and fulfilled life.