Is there a test for good character?  Read on. 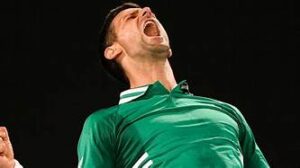 Much has been written in recent weeks about the “Djokovic drama.”  Australian federal court upheld  the immigration minister’s decision  to cancel  tennis superstar, Novak Djokovic’s visa.  Ranked number one in the world, Djokovic had to depart the country literally one day before the Grand Slam tournament began.

The gist of the controversy:  Djokovic, who is unvaccinated, knew of his covid-positive status.  Still, he chose not to quarantine prior to traveling to Melbourne. What’s more, after learning his test result, he participated in a media interview and photo shoot in Belgrade, without informing others of his covid status.

Many other details emerged as the drama unfolded, reflecting what some referred to as his arrogance and dishonesty.  Some in Australia dubbed him “Novax Djocovid.”

At home in Serbia, on the other hand, he is a national hero.  Although admittedly biased, his father “compared his son to Jesus Christ and Spartacus and hailed him as ‘the leader of the free world,’” to the cheers of crowds of supporters.

Australian and US character tests

It turns out that the Australian Migration Act requires  all migrants to pass a “character test” to be eligible for a visa.  The immigration minister can make this judgment in the public interest.  The terms include obvious ones, such as lack of a criminal record.  But they also include assurance that the person in question would not be a danger to the Australian community.  This question of character has certainly been in bold relief as the arguments swirl around this larger-than-life “special” person.

And in the US, to become a naturalized citizen, you must be judged to have a “good moral character.”  That’s defined by immigration policy as “character which measures up to the standards of average citizens of the community in which the applicant resides.”

What is good character or good moral character anyway?

Imperfect as these guardrails are, they challenge us to think about what we mean by these judgments.   Words like honest, trustworthy, ethical, having integrity come to mind.  There’s a flip side, of course, calling up words like selfish, dishonest, cruel, insensitive, immoral, and more.  Wouldn’t it be nice if there were an airtight way to judge a person’s true character. How about a scale from admirable to scurrilous?   Not likely, but we can try, as we think about our worldwide leaders, our superstars, our bosses, and even our friends and neighbors.

Personality and character: Using our own test

How does one’s score on such an imaginary character scale relate to one’s personality?  In the language of NPSP25, any combination of the 14 personality styles can reflect qualities and attributes of someone with a “good character.”  When at least some of these styles become too extreme, however, the picture can become darker.  What if Self-confident, Vigilant, Adventurous  and Aggressive styles strongly dominate other styles, for example?  Then one’s behavior can tilt into being Narcissistic, Paranoid, Antisocial and Sadistic.  Then one’s “character” may not sit so well with others.