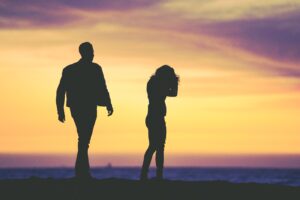 What is your pattern of change—changing partners, that is?

“I meet a man, fix him up and flip him to someone else,” confessed one woman recently in the New York Times.

That’s the title of the “Modern Love” piece Kelly Sundberg recently wrote in the New York Times.  The author, a 40+-year-old divorced mother, commented,  “I don’t want to be doing this, but something attracts me to men who are emotionally withdrawn, and I have a talent for drawing them out.  For their future wives and girlfriends, apparently.”

Why does emotional withdrawal attract her?  What makes these men so withdrawn?  Are they built that way, or are they “damaged goods” from hard knocks in life?

For her, would you call it a maternal thing, or else a matter of an altruistic, self-sacrificing style, to give rather than receive?  Is she performing a rescue operation–a hero, saving a lost soul?  Or does she need to to be needed?  Or does her insecurity kick in if he becomes stronger, more successful, and more self-confident?

There’s no single answer, but this pattern is not uncommon, and it can go both ways.  Plenty of men seek out women who are reserved and may be struggling to get into a confident comfort zone.  And, of course, the same differential can occur in non-traditional partnerships.

Changing partners on a two-way street

A house on the market may be affordable because it’s a “fixer upper,” and it can be splendid once it’s fixed up.  And, yes, it can then be flipped for a profit.  On the other hand, it can be kept and enjoyed as a much-improved home to live in.  But houses are “things” to own, or sell, or give to others; they don’t have a say in the matter and they don’t complain.

It’s a whole lot more complicated when it comes to people!  Many of us can be drawn to people who need “fixing up,” and helping people can be rewarding for both parties.  But if we’re helping someone and hoping for a future together, there are two people in the mix, not just one person and a house.  It has to be, or at least to become, a two-way street.

Of her most recent relationship, Sundberg said, “We liked each other, but our dynamic was that I took care of him.  I knew that for a relationship to be serious, I needed someone who took care of me too.”  Then he did.  “Oh no. He’s taking care of me now.  This is dangerous territory.”

It’s tricky business.  To sustain the relationship, both parties have to change.

After a number of relationships with men didn’t last, Sundberg hoped this new one would.  “Tall and skinny with kind eyes, he felt safe to me, like someone I would never really fall for—not in the way where I lost control.”

They stuck it out, and, in spite of many off-again, on-again cycles, they figured out how to stay together.  “[W]e got back together, and we were honest with each other—that we didn’t know where our lives were going, but we could be committed to each other while holding space for that unknowing.”  Each of them recognized the meaning and value of the other, while coming to terms with the reality that it might not last for a lifetime.  Ironically, achieving that clarity might make it more likely that the relationship could endure.

If you’re in a relationship and the pattern above seems familiar, you and your partner might each want to take the NPSP25 test.  Then you can establish a Group Self-Portrait that superimposes both of your Personality Self-Portraits on a single chart.  One of you may have a prominent Self-Sacrificing style or a Devoted style, and the other might have a predominant Conscientious style or a Self-Confident style.  Such a match can be mutual and rewarding.  But think ahead and be ready.  You don’t won’t to be caught by surprise when your partner starts revealing new stripes– and maybe you do too.

Photo by Eric Ward on Unsplash