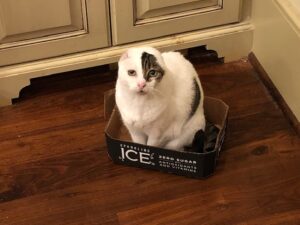 Anybody who has a pet knows that each one has its own personality style.  Maybe you have, say, two cocker spaniels. They’re bred to be alike in temperament. So how come one resists training while the other seems to anticipate your every desire?

And cats! You’ve adopted two from the same litter. Yet one is sweet and cuddly, while the other bites the hand that rubs it just a moment too long.

Your dog, your cat, your fish, your parrot, your hamster: each one behaves differently from others of its species in a number of ways. You just have to get to know them. Journalist Jim Robbins recently reported on “the range of personality traits in individual animals, whether they are grizzly bears, squirrels or earthworms.”

Earthworms! Turns out that Charles Darwin, no less, referred to earthworms as timid, neat and tidy, or slovenly.

Robbins introduces a conservation scientist from the University of Maine, Alessio Mortelliti.  Mortelliti says that the “five common animal personality traits are boldness, aggressiveness, activity, exploratory tendency and sociability.” He has studied aggression in rodents and proclaims the American red squirrel as the winner of the most aggressive rodent contest. “They are incredible. They are the only species where you can conduct measurements on them, you release them then they go up on a tree and come back towards you and yell at you.”

Studying rodent populations, he argues that natural selection can favor certain personalities, such as boldness or aggression.  Also, “the higher the diversity, the more the populations are able to adapt to changes” (such as climate change).

Zebra finches, a cat and a dog

Scientists are studying other types of animal behavior, such as the alpha female in wolf packs, without which the pack disbands, or the mating choices of zebra finches, determined by finding like-feathered friends who are either introverts or extroverts.

Lois has a friend who kept a pair of zebra finches in a large cage. They both seemed extremely outgoing, certainly with each other. They bred so readily that the indoor flock got out of hand. Eventually the friend gave away all but two males. One liked people, the other was aloof. The friend began to notice other differences between them, too, including subtle differences in their songs.

All pet owners, we venture, can describe the personalities of their pets in great detail, if you’ll let them. One of John’s cats (named Schmoo, pictured above) is like Velcro. All she wants to do is curl up in his lap and nap and purr.

Lois’s dog (named Apollo, above), a standard poodle, is a persistent, manipulative talker, barking and whining until he gets exactly what he wants.

Personality styles of pets and owners

But do our pets’ personalities match our own? We’re not sure there are reliable studies on this, although there’s a lot of speculation. Do your own study. If you have a big family and lots of pets, think about which ones pair up with whom. Or take the NPSP25 test and consider if your prominent personality styles seem to match the behavior of your beloved pet.

You are a highly Solitary person. Your companion, a gleaming goldfish, swims around its tank contently alone.

You are a fairly Mercurial person whose cats lick and groom each other, except when they’re taking great offense and screeching at each other.

You are Dramatic and talkative and so is your Amazon green parrot.

Or maybe you just look alike. Lois and her poodle each have very very curly hair. And it’s the same whiteish color, now that her hair has gone natural since Apollo came to stay.