What’s the difference between a personality style and a personality disorder?   The Personality Self-Portrait system emerged in answer to that question.

First things first: Organized medicine utilizes official terms to diagnose illness.  In psychiatry, these are itemized in The Diagnostic and Statistical Manual (DSM) of the American Psychiatric Association (APA).  In the current edition (DSM-5), there are 10 personality disorders listed, and several others have been described, pending further study.

Many years ago, as a specialist in personality disorders, I was asked to join a research group at Cornell University Medical College in New York, which developed The Personality Disorder Examination (PDE), a standardized interview used to study personality disorders, as defined by the DSM.  Research data on the PDE were published, and it has been used extensively in clinical research ever since.

This was progress in helping researchers address the needs of people with personality problems on the severe end of the spectrum.  But a personality disorder isn’t a definitive on or off thing; it’s an extreme version of a trait or style that, instead of being a positive asset, is a liability, impairing effective functioning in many aspects of life.  I have seen firsthand the suffering and despair that people with these disabling conditions contend with, in my many years of clinical practice.

Based on the DSM and the PDE, we conceptually turned down the volume of each official or proposed personality disorder, until it described an adaptive, non-pathological style.  Shown below is the Personality Style—Personality Disorder Continuum that is presented in the book and online.  An extremely useful style in life, for example, is the Self-Confident Style.  Some of it is good, more of it is probably better, but too much of it could be described as Narcissistic Personality Disorder.

Along the way, we developed the Personality Self-Portrait test consisting of 107 self-report questions, and we worked out a scoring system so that anyone could chart his or her unique personality profile.  Lately, with the expert contributions of our colleague Alok Madan, PhD, the test and its results and interpretation are provided online at NPSP25.com.  Unlike the PDE this is not a psychiatric diagnostic test.  What it can do is measure our concept of the adaptable and flexible side of the personality continuum 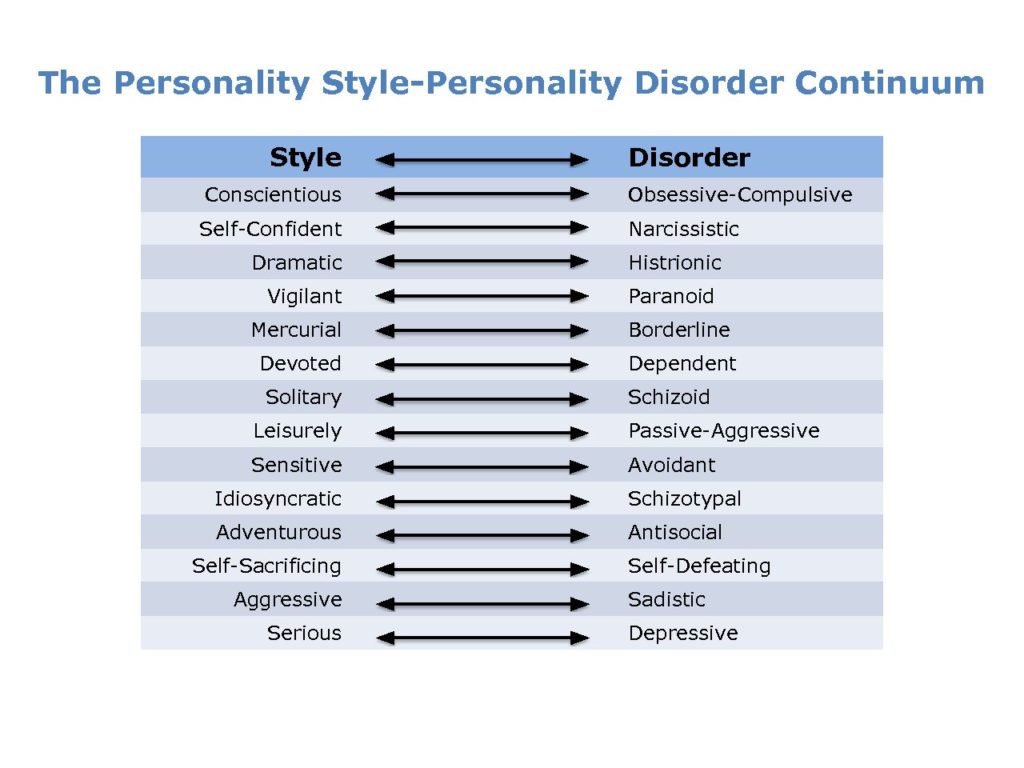 DEAL WITH YOUR ISSUES

But, again, where is that line that distinguishes disorder from style?  The New Personality Self-Portrait system seeks to define the spectrum of normal style and nothing beyond it.  There are specific criteria for the diagnosis of personality disorder, and someone who has been diagnosed at some time may well moderate with treatment.   The truth is, on either side of the style-disorder continuum, one can well have issues worth untangling.