Pete Davidson (The King of Staten Island) and BPD 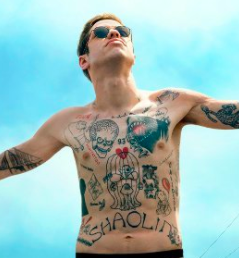 BY JOHN M. OLDHAM, MD
Yes, people with personality disorders can and do make it big, even while suffering deeply. But they don’t always recognize that they can be their own worst enemy. When they’re feeling miserable, they may think it’s because other people are being unreasonable and don’t understand them. They may not believe they need help, but even if they do, they may feel too ashamed or embarrassed to tell anyone about it.

But sometimes they do. Pete Davidson, a popular cast member of Saturday Night Live is courageously outspoken about having Borderline Personality Disorder (BPD). Now he’s featured in a new film about his life experiences: The King of Staten Island. More about that below.

Davidson then
In a previous blog on this site, from December, 2018, I posted a link to a Good Morning America piece on Davidson. He spoke about his determination to speak up about his condition and to advocate about the importance of getting help, which he did by seeing a therapist. I was briefly interviewed, and I emphasized his courage and the importance of being open about his struggles. One of the main messages was that Borderline Personality Disorder, as challenging as it can be, can be understood and overcome with help. It does not rule out success, as the talented Davidson illustrates.

I’ve often described this continuum using a blood pressure model: Each of us has a personality made up of a unique mix of styles, some more prominent than others. Just as blood pressure is a vital and necessary part of being human, so is personality, and in both cases too much of a good thing can become a problem. When a particular style is so prominent that’s it’s in the extreme (“hypertension”) range, often dominating and overshadowing other personality styles, it could reflect the presence of a personality disorder. Even among the rich and famous, a personality disorder can involve substantial distress and interfere with social and occupational functioning.

On the style side, Mercurial is fairly common. Someone with a prominent Mercurial style can be intense, passionate, romantic, impulsive, imaginative, and creative—a colorful, fun-to-be-with person. But such a person can also be reactive, demanding, needy, and changeable, so it’s not always smooth sailing in this person’s world.

Turn the volume of this style way up, however, and what may emerge is called Borderline Personality Disorder. Then the fun is hard to find. Someone with BPD can lose a sense of purpose, begin to feel rudderless, experience wide swings of intense emotion, from highs to lows, set off by any little thing. They have trouble trusting others and can alternate between holding tightly to family and friends, and then pushing them away. Relationships become hard to sustain, and loneliness and despair can be painfully overwhelming.

The release of The King of Staten Island made the front page of the New York Times Arts and Leisure section recently. Given current realities, the film was being streamed, and Davidson and director Judd Apatow were being interviewed via Zoom by reporter Dave Itzkoff.

“At ‘S.N.L.,’ where he completed his sixth season, his tenure has been productive but intense and tumultuous,” Itzkoff commented. He added that “the comedian—who has dealt with depression and borderline personality disorder—has also given fans legitimate reasons to be worried about his welfare: In 2018, he posted troubling remarks on Instagram, prompting widespread concern on social media and a check-in from the police” but that he “is now trying to tie together these many strands in ‘The King of Staten Island,’ a fictional comedy-drama based on his life.”

Later in the interview, Itzkoff asked Pete: “You’ve been candid about the mental health issues you have dealt with during your time at ‘S.N.L.’ Were you worried that these issues would be exacerbated while you were making this movie?” Davidson replied: “That was my main fear…. I’m really lucky that Universal believed in the project and in me. Especially with what’s out there about me and how open I am about it.”

As Davidson adds, these are all things that he talks to his therapist about, too.