Inter-brain coupling: Getting in Sync 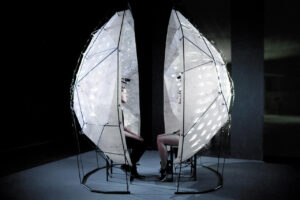 What happens when we feel we’re truly in sync with another person?  It’s such a satisfying feeling of shared purpose, connection and understanding. But are we really on the same wavelength? Now neuroscientists have invented a machine to measure that. And the answer is: yes, our brainwaves can be literally in synchrony. The researchers call it “inter-brain coupling.” Neuroscientist Suzanne Dikker and her colleagues posed this question: “When we feel connected or engaged during social behavior, are our brains in fact ‘in sync’?”

To answer that, they recruited over 5,000 people at museums, music and art festivals throughout the U.S. and Europe. Two by two, participants stepped into the Mutual Wave Machine.   That’s a “brain experiment meets interactive art installation,” as the researchers described it.

How to measure an inter-brain link

Fitted with headsets to measure their brainwaves, they sat face to face inside two beautiful clamshell-like contraptions. (See photo.)  Many were strangers to one other. To try to achieve synchrony, some did things together, like sing a song or talk. Some tried to have eye contact. Others chose to think about the same thing. As they interacted, lights continuously flashed in patterns around them. These represented reflections of their brains’ actual electrical patterns. More light meant more synchrony, less light less synchrony.

Just thinking about the same thing had no effect on synchrony. Relating to each other through a task or sustaining eye contact definitely did improve brain linking. Interestingly, not all pairs of strangers showed lower synchrony than pairs who were old acquaintances. Likewise, not all who had known each other for a long time linked better than strangers.

Personality factors that get can get you in sync

So are you and your friend/partner/family member in synchrony or not? The NPSP25 Group Self-Portrait can provide some information.   This is a representation of your combined personality pattern created by superimposing your individual Personality Self-Portraits on each other. It shows how alike or different you are in key traits–such as empathy, focus and relationship anxiety–that make up the various personality styles.  You’ll see if you think anything needs changing. If so, maybe you can move on to more meaningful inter-brain coupling.

Click on this link and scroll down to see the Team Self-Portrait and interpretation of the NPSP25.com team.