Empathy is a word that crops up a lot 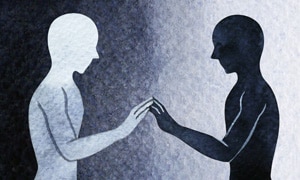 this election season.  We tie it to the personalities of candidates for public office.   We want leaders who can put themselves in our shoes.  Who can tune in to what we go through, even without having had our experiences.  Who can feel our pain, if only vicariously.

No matter what you want

We often hear that our elected officials or candidates for public office promise to do “what the American people want.”  But how could they?  There are millions of American people who want lots of different things.  Even the basics–life, liberty, the pursuit of happiness–mean different things to different Americans.  It’s those differences that we need to respect and acknowledge.

The ability to empathize does not require agreement with anyone’s goals or dreams.  It does, by definition, require an inherent ability or at least a strong desire to imagine what it feels like to be another person.   To see things from another person’s perspective.

We should also ask that of each other, not only of our leaders.

Figuring out your empathy personality style

That said, it is inevitable that some of us have a greater capacity for empathy than others.  To be sure, it can vary with personality style. In the language of the New Personality Self-Portrait, its presence is associated with some personality styles and its absence with others.  But every person’s Self-Portrait consists of a pattern of styles.  One can usually find something to work with to help develop empathy.  (Or tone it down, about which more below.)

In contrast, empathy may be hard to muster for people whose prominent styles are Idiosyncratic (unconventional, inner-directed, different) or Solitary (unsentimental, stoic, self-contained, comfortable alone).  Think of Greta Garbo, perhaps.  And empathy may seem irrelevant or foreign to those whose prominent styles are Vigilant (cautious, defensive, reactive to criticism) or Aggressive (assertive, power-seeking, physically active). Think of Bashir al Assad, for one.

The capacity for empathy for those with other styles may vary widely from one person to the next.,  That depends on each person’s mixture of styles, plus the nature of life experiences at any point in time.

Still, many of those who don’t speak the language of empathy very well can learn.   Motivation helps.  Even someone who is highly Self-Confident (self-assured, entitled, self-centered, competitive) can put that all-encompassing self-focus aside when threatened with the loss of love from someone centrally important.  A person who is highly Sensitive (reserved, comfortable with routine, self-controlled) can learn this lesson:   Recognize that too much concern about what other people think of you may block your own ability to see others for who they are.

One can also learn to tone down the gift of empathy, if need be.  Are you high in  Mercurial style (intense, passionate, reactive, romantic)? You may sometimes put yourself into other people’s shoes so well that you lose sight of your separate identity.  Hang on, too, to the valuable ways you are unique.

Working on empathy has a huge payoff.  Relationships with others become so much more rewarding.