Do You Know How to Listen? 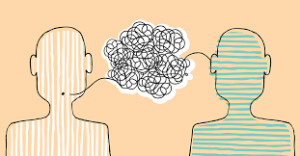 How to be a good leader: Learn by listening.

That struck me as the main message of a small book sent to department chairs throughout the country some time ago by the American Association of Medical Schools. I’ve tried to do just that throughout my career, sometimes more successfully than others. And I’ve also learned that such a golden nugget of advice doesn’t just apply to leadership skills—I’d argue that it’s a crucial ingredient in relationship skills.

But enough about me

How many people have you met who, on first acquaintance, seem genuinely interested in you, asking about your background, your family, your career? They seem to be listening attentively. But before you have said very much, they interrupt—let’s say, as follows: Oh, you lived in Michigan? What a coincidence. I grew up there. I loved my town and I loved my high school—I was valedictorian, by the way, and my family is still there. Everybody knows my family”…yadayadayada.

It’s like the joke about the man who says, “But enough about me, let’s talk about you! Have you read my latest book?”

It isn’t funny when someone you know steers the conversation to politics, soon to launch into a rant about the outrages of the “other” party (yours, by the way). Once the steam cools, there’s a semblance of a dialog, but no point you make seems to be heard. It certainly seems that this person, while soliciting your point of view, is really just waiting for you to stop talking, in order to launch another zinger.

It’s amazing how hard it is for many (maybe most) of us to really listen. In the print edition of the New York Times on January 12, Kate Murphy wrote an opinion piece called “Lessons in the Lost Art of Listening.” She asked: “When was the last time you listened to someone? Really listened, without thinking about what you wanted to say next, glancing down at your phone or jumping in to offer your opinion?”

She argued, in turn, that “[g]ood listeners ask good questions.” I would add that in order to ask good questions, you have to want to hear the answers. You’ll ask good questions if you are genuinely interested in getting to know someone—that person’s values and interests–and in bringing curiosity and respect to the conversation. If you’re really listening, you’re likely to follow up to learn more: You really went hang-gliding on your vacation? That would scare the hell out of me—no way could you get me up there! What was it like?

My work as a psychiatrist requires genuine interest in and respect for other human beings. We use the term “mentalization” to mean trying to see yourself from the outside and to see others from the inside. What kind of person do I seem to be to someone else? What would the world look like if I had lived that person’s life?

The personality of the listener

Of course, your own personality style will contribute to what you ask and how you listen. Good listening skills are likely to correlate with a prominence of some of these NPSP25 personality styles in your Self-Portrait: Devoted, Sensitive, Self-Sacrificing, and Serious. People with these styles put a high value on relationships, on learning what other people think, and on being helpful to others–and they know their own limitations. People with a predominance of Sensitive style, however, may feel shy about asking questions, even if they are good ones.

On the other hand, those with high scores on Mercurial, Idiosyncratic, Adventurous, and Aggressive styles may not be the best listeners, because they can be so focused on action and spontaneity that they march to their own drummer, not noticing that not everybody wants to ride the rapids. People with high peaks in other styles may be really good listeners when life is good, but maybe not so much so when things are tough–indeed, that could apply to anybody.

But whether or not you are gifted with good listening skills, you’ll benefit from practice. As Murphy says, “The more people you listen to, the more aspects of humanity you will recognize, and the better your instincts will be. Listening well can help you understand other people’s attitudes and motivations, which is essential in building cooperative and productive relationships, as well as,” she adds importantly, “discerning which relationships you’d be better off avoiding.”