Can you forgive? Let Desmond Tutu help you 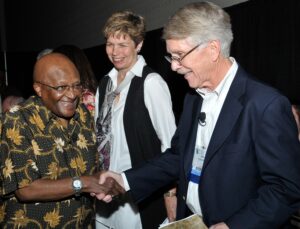 Filled with calamities, 2021 should not be hard to beat, but who knows?  Hard to see much light at the end of the pandemic tunnel or the climate tunnel, or to see an end to the polarized political yell-fest.    Worry, sadness, despair, hopelessness, anger, hate and resentment surround us, or at least those are the stuff of our daily headlines.

How can we brighten the darkness and soothe the pain?  Here’s one suggestion:  let’s turn off the cable news for a bit and seek out voices of wisdom and hope.  The world has just lost one such voice—that of Archbishop Desmond Tutu.   Yet his words will provide solace and comfort for years to come.  Let him help us to forgive.

“Without forgiveness, there’s no future”

I had the pleasure to meet him some years ago (shown in the photo) and to hear his Convocation Lecture at a meeting of the American Psychiatric Association in Hawaii.  In those remarks, he said, “People are created to do good.”  And, “We need each other, and anger and hatred and resentment are corrosive…we are made for goodness, for gentleness, for compassion, for caring.  That is when we are at our best.”

You think that sounds naive?  Don’t forget that Tutu won the Nobel Peace Prize in 1984 for his role in unifying South Africa after the fall of Apartheid.  Throughout his writings, one of his headlines is the importance of forgiveness.  “Without forgiveness, there’s no future,” he said.  But he elaborates on the meaning of forgiveness:

“Forgiving and being reconciled to our enemies or our loved ones are not about pretending that things are other than they are. It is not about patting one another on the back and turning a blind eye to the wrong. True reconciliation exposes the awfulness, the abuse, the hurt, the truth. It could even sometimes make things worse. It is a risky undertaking but in the end it is worthwhile, because in the end only an honest confrontation with reality can bring real healing. Superficial reconciliation can bring only superficial healing.”

What an important and perceptive and helpful message!  To see reality for what it is, eyes wide open, even when it’s unfair or hurtful or out of balance.  Here’s one last quote from Archbishop Tutu:

“If you are neutral in situations of injustice, you have chosen the side of the oppressor. If an elephant has its foot on the tail of a mouse, and you say that you are neutral, the mouse will not appreciate your neutrality.”

Perhaps many of us feel like the mouse these days, being sat on by the donkey or the elephant, making it hard to forgive. Remember, too, that Desmond Tutu chaired the Truth and Reconciliation Committee in South Africa in the late 1990s.  Victims and perpetrators of horrible human rights violations testified.  For their honesty, violators could seek amnesty from prosecution.   Forgiveness is a process that may unfold over a lifetime.

Forgiveness is the near neighbor of empathy, and following Tutu’s sage advice, we need to try and see things from others’ point of view.  That doesn’t mean we have to agree, but we can try to shed the angry edge and still disagree.

For a very warm and personal snapshot of “the Arch,” as friends sometimes called him, see the lovely recent piece in the Shelter Island Reporter by my colleague Lois Morris.  It’s called  “Desmond Tutu on Shelter Island: A Memory of Friendship and Joy.”