ARE YOU A CAT PERSON? 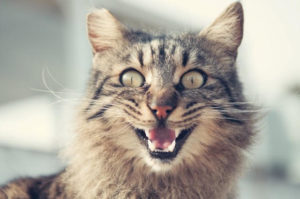 ARE YOU A CAT PERSON?

Whether you are an “agreeable” type or have neurotic leanings, researchers who surveyed more than 3,000 cat owners in the UK found that your personality is likely making an impact on how your cat behaves.

University of London and Nottingham Trent University researchers point out that the personality/behavior matchup may be a matter of selection—that is, a neurotic person may be more likely to pick out a cat that seems to be neurotic. Also, they found, neurotic people tend to go for pedigrees. (Neuroticism refers to traits such as proneness to moodiness, anger, anxiety and stress.)

Even so, you will have a “parental” influence. From the moment you adopt a kitten, your personality and behavior affect your pet’s habits—good and bad—as well as its health and well-being.

Should you let Fluffy out? Giving a cat freedom to roam says a lot about the caretaker and the cat’s health.

What Your Cat Says About You

Furthermore, as with parents and their children, cats’ behaviors tend to mirror their caretakers. The researchers found:

Whatever your personality style, it’s reassuring to know the scientists found no consistent association between the owners’ personalities and their cats’ bad behavior, like scratching up the furniture or not using the litter box.