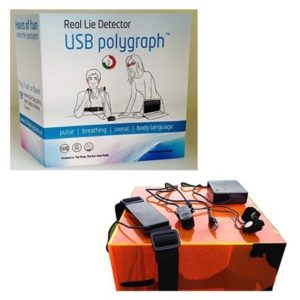 For $99.95, anyone can purchase a lie detector from Walmart. Who buys a polygraph test? Who uses it? Who relies on the results? These are questions I can’t answer, and I was surprised to find one being marketed to the public, since even in expert hands, lie detection results are not foolproof.

From Little White Ones to Big Whoppers
What I do know is that catching someone in a lie is not so easy and telling “little white lies” is extremely easy. We all do it from time to time. It may be exaggerating an accomplishment or staying quiet about something we’re not so proud of. Even yarn-spinning can be entertaining. But what do we make of a person who fabricates whoppers with such conviction that we are totally taken in, at least for a while?
Is there a typical personality profile that predicts honesty and integrity? On the NPSP25 test, such a person would likely score high on the Conscientious style. This style is characterized by strong moral principles and a belief in doing what’s right.
What about the colorful character who reshuffles the facts to fit the moment? Such a person might have elements of the Adventurous, Dramatic, Leisurely, and Aggressive styles.

When Lying Is a Habit
But what about the habitual liar? This is the person who callously and deliberately crafts dishonest tales of fiction to achieve self-promoting goals. His or her predictable behavior involves being manipulative, disregarding social norms, and having a lack of concern about the impact of the behavior on others. This person likely has a personality disorder, such as an antisocial personality disorder or narcissistic personality disorder.

People with these disorders have pathological personality traits that can be quite disabling—maybe not at first, but eventually—and they are significantly impaired in their ability to function in the world. They may well not recognize the consequences of their behavior, or even that they are lying.

The NPSP25 test requires telling the truth to reflect an accurate portrait. So those who do enjoy stretching the truth from time to time should take a deep breath and answer honestly. Not to worry, the test does not diagnose disorder.