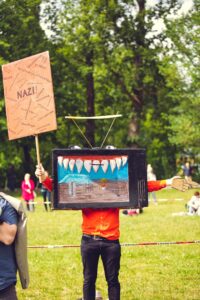 Does the New Personality Self-Portrait 25 capture a vulnerability to conspiracy theories?  Recent studies have targeted a handful of likely personality traits that we can track.

Honestly, with all the social and political instability of these times, who doesn’t entertain at least some unsubstantiated explanations?

“More than 1 in 3 Americans believe that the Chinese government engineered the coronavirus as a weapon,”reported New York Times science writer Benedict Carey in September.  As well, a third are sure that the Centers for Disease Control and Prevention exaggerated the threat of the disease “to undermine President Trump.”

The Cornell Alliance for Science just reported the results of a worldwide study of 38 million English-language articles about the pandemic. They determined that more than a million of them “disseminated, amplified or reported on misinformation.”

Subsequent fact-checking likely undercut the power of some of the original reporting.  Of course, facts help guide appropriate responses to what is a very real threat.  New research findings are providing more scientific explanations.  Unfortunately, rejection of science can lead unknowingly to behaviors that spread the disease.

For people who are drawn to unsubstantiated explanations, recent research has turned up a few characteristic personality patterns.

One such is “the Injustice collector,” according to Benedict Carey’s report of a study headed by Emory University psychology researcher Shauna Bowes.   This person is also “impulsive and overconfident.”  The study also pointed to a person with a typically solitary, anxious, moody, and perhaps detached personality style.

Bowes also collaborated with psychologist Scott Lilienfeld to study /the personality profiles of over 2,000 people.  Four traits turned up among those who are most susceptible:  entitlement, self-centered impulsivity, cold-heartedness, and psychoticism.  (This last trait involves aggression and hostility).

What to look for on the NPSP25

A Personality Self-Portrait that is dominated by Vigilant and/or Idiosyncratic styles may suggest a vulnerability to conspiracy beliefs.  Vigilant people are cautious, defensive, and reactive to criticism.  Idiosyncratic types are unconventional, speculative, and different.

In these cases, there may be substantial impairment in functioning and a need for professional help.

The NPSP25 does not diagnose personality disorders.  But it could help you put any attraction you might have to unsubstantiated explanations into better perspective.